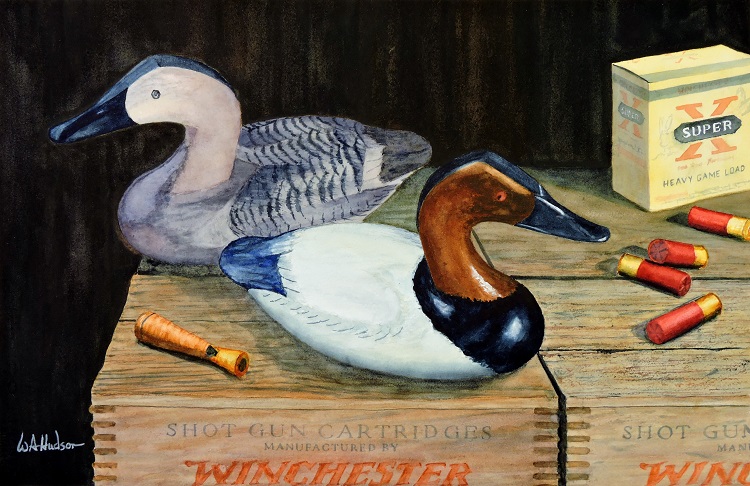 Decoys have been a central element of Chesapeake culture for centuries. In the beginning, they were made for one purpose — to lure waterfowl within range of the hunter’s shotgun. Decoys were simple, utilitarian representations of ducks and geese rough-hewn from wood. No one considered them art. Today, decoys lure far more people than waterfowl. One is perhaps more likely to find a decoy adorning a collector’s mantelpiece than floating in a hunter’s rig. Contemporary carvers produce sophisticated works of art with century-old skills that have been passed down from master to apprentice for generations.” (Ref Havre de Grace Decoy Museum)

My painting above contains both the drake and hen high-neck canvasbacks. The canvasback is often called the aristocrat of ducks, prized by sportsmen. It is a diving duck, the largest of its genus, fast in flight, that lives entirely on and under the water. In the early 1950s, the Chesapeake Bay wintered 225,000 canvasbacks, or one-half of the entire North American population. By 1985, there were only 50,000 of these omnivores wintering there due to the gradual loss of submerged aquatic vegetation (SAV) in the bay. Although the Chesapeake population stabilized, the canvasback range has shifted south towards the Lower Mississippi Alluvial Valley.